Quite gutted that I can’t buy early Beta Access to Street Fighter v in my geographic area, so I have been making the most of the fighting options available for Street Fighter iv, on the PS4, with Geek Fighting Gadgets 🙂

I’ve been searching for an hard copy of SFiv for the PS4, to be told they’re not available; so reluctantly settled for the digital version… all cool but my download speeds are far from state of the art, if fact they’re shite 🙁

Then I needed to control my fighter with the highest response and fidelity, while keeping the price reasonable, as a solution I game up with 2 options:

TITAN One unleashes the TRUE POWER of your video game controller. The crossover feature allows you to use your favorite PlayStation, XBox, Wii/WiiU Controller or PC Keyboard & Mouse on the PS4**, Xbox One*, PS3, Xbox 360*, Playstation TV and PC. It also converts your controller into a fully modded controller without voiding your warranty or installing any chips or wires. The Titan One comes with the latest Gtuner Pro software and with a library full of feature-packed Gamepacks for many of today’s popular titles. With the Gtuner Pro software plugins you can create/record/use macros and remap any button or joystick on your controller. The Visual Programming Interface and the GPC Scripting Language enable you to easily and quickly program the Titan One to your own needs. Compatible with PS4**, XBOX ONE*, PS3, XBOX 360*, PLAYSTATION TV and PC.

My hope with this little dongle was to use my existing sanwa octagonal gated MadCatz Fighstick Pro. Everything worked OK, I could even set it up to resolve the reconnection issue every 7 to 10 mins, but on top of my poor connection, the lag was killing me.

Now I’m not great at Street Fighter, but I hold my own. Playing online via the Titan 1 dongle I was getting my arse handed to me every fight. Now I know I’m a little out of practice, but this was beyond the norm, I was even tempted to sign back up to XBOX Live Gold! 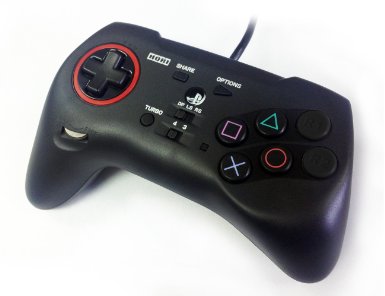 The HORI Fighting Commander 4 seems a robust bit of kit, and it certainly does the job it’s intended for. I was only learning stick on the xbox, so not sure how much this increases my love of this pad, but it works well.