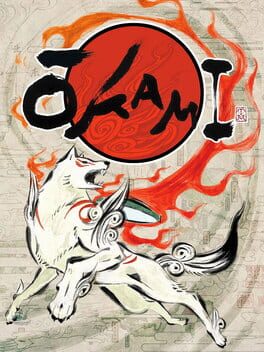 [rating:3]
I have vague memories of playing a japanese copy of the original Okami. I had no instructions, not a clue what the game was about, and didn’t even know the real name of the game… think I was referring to it as ‘paint brush wolf’ at the time 🙂

Now I get to play the HD re-make!
The addition of English subtitles reveals the godly ancient plot, that’s cool.
The green imp helper Issun irritates me with corse innuendos… reminds me of a pervy, somewhat useless, Navi

I’m only half an hour in, but everything that impressed me in the original is back, this time with buttery smooth animation, that reminds me of Zelda vs Asterix. I love how you bite things to carry them around and how chracters cling on while being ferried to destinations. There’s even a kinda Sonic feel to it, as you green out areas, it’s not only the flora which returns, but also a variety of cute fauna.

The fighting is truly original, bash the enemy incumbents a few times, until they ‘black’ out, then deftly take them out with a swift stroke of the brush. Intuitively controlled; L1 brings up a canvas over in-game objects, shows a brush, and slows time to a standstill. Move the brush with the thumb stick, applying brush to canvas via x.

I’m a big fan of cell shading, and this beautiful masterpiece justifies my admiration. From the elegant gallop of Amaterasu, to the The goddess Sakuya‘s risqué outfit. The world is beautifully represented, in a kind dream scape. The NPC’s have a comic element, and speak in a form of Simlish. 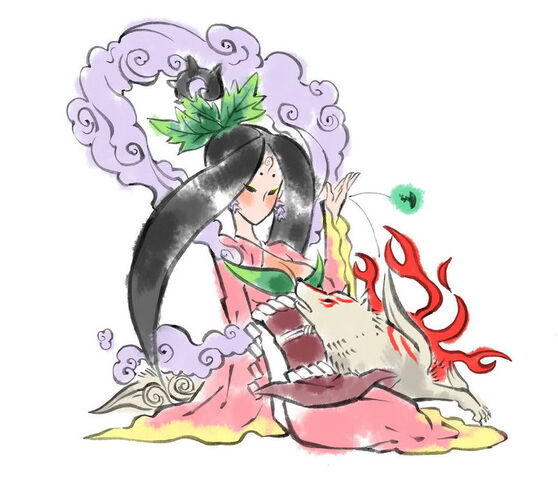 The sign posts on the map bring out a grin on my face. Not sutle, these huge hyper-real signs hang in the air, ensuring you’ll never venture off in the wrong direction by accident.

The monsters, whose presence in an area deem it evil, all seem to have a musical nature, and don’t really come across as threatening. When you come across a horde they’re usually jamming out, dancing around a camp fire, hardly menacing. But then, as a great example to the off the wall humour of the game, they show you their arses, slap their bottom cheeks, and combat commences, wtf? But still amusing and keeps with the lighthearted spirit of the adventure.

Off to howl at the moon, or rather change it to the sun…

Legacy
Ben Mattes, producer for the 2008 Prince of Persia video game, cites okami as well as Ico and Shadow of the Colossus as influences on the gameplay and artwork for the game.[145] Capcom’s Street Fighter IV is also stated to have models influenced by okami with hand-drawn images and brushstroke-like effects.[146] A new Disney video game, Epic Mickey, uses similar drawing aspects as okami allowing the player to draw and modify parts of levels to proceed.[147] The final boss, Yami, appears as a boss character in the crossover fighting game, Tatsunoko vs. Capcom: Ultimate All Stars.[148] Amaterasu is also a playable character in Marvel vs. Capcom 3: Fate of Two Worlds.[149] After Clover’s dissolution and most of its staff’s subsequent reformation as Platinum Games, one of their next games, Bayonetta, contains several references to okami; the most notable of these is when Bayonetta transforms into a panther, and like Amaterasu, a trail of flowers and plant life follows her.[150] For the 2010 San Diego Comic Con, Capcom raffled a limited run of t-shirts designed by Gerald de Jesus and iam8bit that placed Amaterasu and Chibiterasu (from okamiden) into an homage to the Three Wolf Moon t-shirt.[151]

No surprises why I love this title, it’s the influence for other favourites of mine, and synchronicity as I began playing Platinum Games‘ Metal Gear Rising: Revengeance this week, a wonderful tribute to Bayonetta