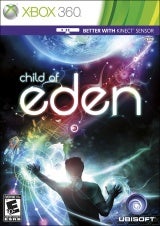 AS you may have guessed I’m a gadget collector, usually more expensive & useless the better. I’m justifying why I acquired a kinect at launch, when there were no decent titles (it’s true!) and no actual footage of upcoming games (the Star Wars on stage demo doesn’t count as it was acted out).

So I installed software on my Linux box, that could mimic what the xbox does with the kinect, with limited success. I’ve lost weight learning dance & tai chi moves, to the humour of my wife. It’s pretty much being a white elephant, did I mention a redecorated my games room to accommodate the kinect box in the optimum location 🙂

Anyway one title released tomorrow will bring my kinect back to life; Child of Eden

thrusts the player into the center of a battle to save Project Lumi, a mission to reproduce a human personality inside Eden, the archive of all human memories. As the project nears completion, the archive is invaded by an unknown virus. The player’s mission is to save Eden from the virus, restoring hope and peace.
This game is a collaboration between publisher Ubisoft and acclaimed videogame creator Tetsuya Mizuguchi — the mastermind behind the acclaimed game Rez. The player becomes truly immersed in the game, with no physical barriers between him and the game world. ign

Since the Dreamcast release of Rez I’ve been in love with the game, a title with it’s own genre. It’s a game I love to show to friends & non game players & many pleasant apres rave sessions have been spent in journey mode on my xbox.

I’m very much looking forward to standing mesmerized in front of my TV, arms raised in a kind of half surrender, guiding my avatar through the neural network, blasting a digital virus. Bobbing my head to an initial mellow trance, working up to the end of level peak, where I hope the feeling will be near euphoric.

Anyway the release is tomorrow; hope my local dealer will be able to attend to my digital vice & have a copy in stock, if not I could always pick it up online

Update1: wtf! No copies in Auckland! Eh oh lots to play & I’m going to do a little analysis on the prices we’re charged out here in NZ