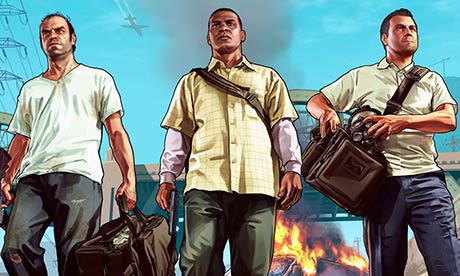 Here’re a summary of nice to know GTA V Tips and Tricks within the Los Santos World, that I’ve realised over the past few days.

Great location to lose the cops… like you need an excuse to enter
Clothes shops can also be used, although perusing garments isn’t quite as interesting

Full health for a dollar… although I can’t seem to find anywhere yet that will serve me fast food?
Who doesn’t love a mouth full of Sprunk?

As in real life, great locations for munchies and other health giving beverages + can be held up for $’s

The smaller jets can be stolen from the airport early on.
I recommend coming in through the gates/fence from the South.
And you can then park them in Sandy Shores Hanger… where you also have access to a chopper, that in turn opens up the parachute and the true scale of the island.
Note the stashed stolen aircraft is not there on each visit, however I think this is controlled by if you arrive at the hanger while in a current mission.

Use these as often as useful, kicked in by pressing down both sticks… but you already knew that 😉

Finished a mission with one of the 3 characters?
Need to travel across the city?
Swap, adventure with another dude, then switch back to the other character.
You’ll more than likely be closer to where you need to be, and if it’s Trevor it’s usually humorous 🙂

Real fun, zip through the traffic quicker, and scale the tallest mountain
Crashing critically can cost you the best part of $1k in medical bills

Remains of a shoot out, off the circular highway in the North West, on the track that leads South East from Paleto Cove… found with Trev and Frank, maybe Mick?

I car just flashed me while I was riding a motorcycle the wrong way up the highway, to warn me of a police speed trap!
How cool is that?