Back in the Elite:Dangerous universe 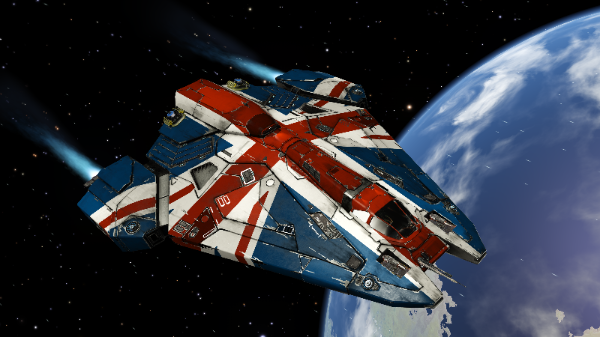 After 6 months or so away from playing, I’m back in the Elite:Dangerous universem I thought I’d go back and visit space, see if much had changed.

After spending 3 evening trying to establish and fix when my PC would randomly boot while running Win7. After checking everything from BIOS t, drivers, and the PCU, removing and refitting the memory seemed to fix the issue… for now.

I then installed all of the over due Win 7 updates, and upgraded Elite:Dangerous to version 1.4… now can I play?

Nope, my joypad setup needed re-mapping, and 6 months away from a game with as many buttons this took me the best part of an hour to set up my Ps4 pad.

Finally I get to launch; first thing I notice is that jobs look to be paying more. I find an easy delivery task paying 250 credits, score.

So I’m out at the Pratchett’s Disk, HIP 74290 still paying respects to Sir Terry, the job I’ve agreed to delivery point is 17 jumps away. No worries off I set.

5 jumps into my voyage my Clipper is running low on fuel, and each star seems to be a Brown Dwarf. After a stress over if I’ll run out of fuel I run into a string of class M Stars, fuel aplenty.

Everything else passed without incident, until I arrived at my target system.

My ship had begun to decelerate, approaching the space station, when I was intercepted with an interdiction. No problem I thought, I’ll just drop out of supercruise, receive the threat of destruction, and just jump away to safety and 250 credit pay day… yeah right.

Dropping out was the easy bit, I was then blasted out of the sky… I didn’t seem to have a button mapped to jump, and my Clipper was unarmed!

So after 3 days fixing my PC, a day of downloads and upgrades, an hour of mapping keys, 2 hours flying across the solar system, I was blasted out of the sky by a NPC pirate, lost my 250k pay day, and it has cost me the best part of 1.5 million credits in insurance to buy back my Clipper.

I must love this game 🙂

The today I can’t load E:D as it tells me a time check failed!