8 and 16 bit RPGs and soundtracks

At the end of the 80’s, as a teenager RPG’s had just started to be released on consoles… or more importantly for me, on the ones I owned. I’d been reading the Fighting Fantasy books of Stephen Jackson and Ian Livingston from when they were first available, now I had the opportunity to role play without a dice, pencil, and eraser!

The titles that are most prominent in my memory: 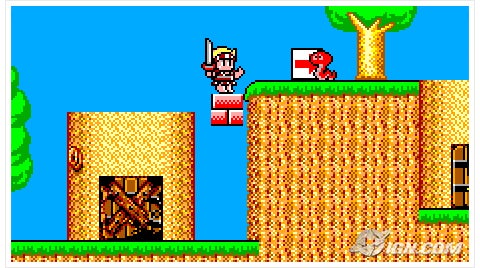 [Rating:3] – Areas could be used differently down the line, the store influenced game play

Wonder Boy III The Dragons Trap 1989
The 2D masterpiece, and 3rd wonder Boy installment…let’s see a pre-teen have the patience to play that to completion today, with its pixel perferfect jump and hit requirements 🙂
What’s more you changed into different were-creatures:

Together with weapon and shield (was it armour too) upgrades. This certainly had a role-play element to it, although it was quite linear. A password save feature meant it was a much extended game than many about at the time.

Its was also EGM’s Master System GotY for ’89
Here’s a speed run in less than an hour! Speed Demos Archive

Ultima IV 1990
The year after I picked up this classic, IIRC I paid a small fortune for it back then, but I certainly got many hours out of it.
My memories of the game are vague: I remember a large fold out map, being asked questions at the beginning that set my class, Bard I think. I kept a note book of locations and conversations… this game was so huge, compared to anything I’d seen before, it changed my expectations of games from then on.
The challenges were more less obvious than previous titles, and the origins from D&D of the game device are evident.
I don’t think I ever completed it, but the cover of the game impressed me deeply, I’ll cover that another time 🙂

[Rating:3.5] – The scale was epic. Pokemon (never played it) would never have been if this masterpiece hadn’t existed

And my intro to Final Fantasy… kinda, Final Fantasy Legend ’89… this exceeded my expectations in many ways, an epic RPG on an hand-held!
But due to my severely limited cash, and wanting to keep up with new releases, I think I turned over this cartridge before I reached the ‘top’, for some other novel title.

I’d never heard of FF back then, remember the days before the web? No many of you probably don’t 😉
All that was known of games was from monthly overpriced, domestically focussed game magazines, and school yard myths and gossip.

[Rating:4] – A line in the sand, modern day FF would never have occurred without the boundary breaking combat, spells, and scale. The map and plot tracking could have worked better, but in today’s games it does

Rings of Power 1991
the days when EA were looked upon as cool, with the bigger than other non EA Mega Drive (I was in the UK) cartridges, where the games actually saved! Saved to the cartridge!
This title changed everything again, the gorgeous 3D graphics, it felt like an open World to explore. This was another game where I kept a notebook to keep track of what was where… this makes me appreciate the mission log in Skyrim so much more 🙂
Here’s a much better summary than I can remember from another kiwi: jennymeinecke.blogspot

Anyway, back then in gaming the tunes weren’t so sweet, or maybe if they were, they became irritable and repetitive when applied to the timely scale of a massive RPG.

Intro Zeppelin, here’s one of their famous tunes that took me through the hours, and listening to it today brings back those sprites. Anyone else have tunes that bring back memories of games?
[Rating:4.5] – I love the composition, but I think their popularity suppressed the thinking beyond what they’d already achieved.
http://youtu.be/9Q7Vr3yQYWQ