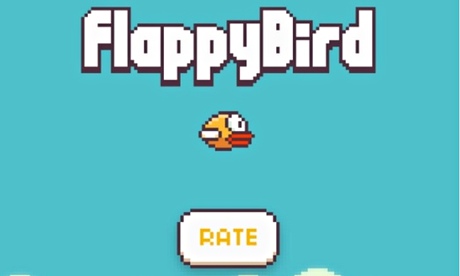 After reading this article in The Guardian I decided to take a break from GT6 (I’ve +200% log in bonus, so was grinding, building up my bank balance) and after 5 mins playing it, I’m ready to delete it.

From the article:
Flappy Bird is the No 1 free app in the Google Play app store. Since its launch on the site last week, it has become such a phenomenon that people are already calling it the new Angry Birds. In it, you control a pudgy green bird. Tap the screen once and the bird soars into the air. Leave the screen untapped and it plummets to the ground. The bird lives in a world full of pipes, and you have to guide it through the gaps between them. If the bird misses one gap – just one, no matter how glancingly – it dies, and you have to start again.

My high score is four. I've got the poxy bird through four poxy gaps. I've only played it for a maximum of 20 seconds before the stupid bird cracks its useless skull against the sodding pipe again and I have to start from the beginning. I hate it. I hate Flappy Bird. And all birds now. I don't even know why it needs to go through all those pipes anyway. There's probably nothing at the end of it, anyway. Just more pipes. That bird is an idiot.

It is simply infuriating!

The bird reminds me of the ship from an old Sega Master System favourite, Super Fantasy Zone (Play Here ), and the 2D world is a direct rip-off from Super Mario.