This month I finally got around to picking up Doom for the PS4 after playing the demo.
Hard to believe that I left it for so long; I’ve had heaps of fun, loving the simple run an gun format, and exploring the maps Bethesda have put together so well.
As I was late to the party the update was huge, 30 odd gig iirc, but kudos to Bethesda for it all being free of charge.

Not getting much play time I dropped the difficulty early on, but this hasn’t reduced the fun factor, and some of the encounters have still taken me several retries. Loving how it keeps the essence of Doom, from the shotguns and BFC [Big Fucking Gun… did you think Musk made up that acronym :)], to the hidden passages behind movable walls. Then there’s the chainsaw executions that have the bonus of filling up your ammo, the gory varied R3 executions that build back up health (and possible ammo + shields) and keep the game flowing, and the runes that mix up the standard play style.

Back in the 90’s I spent time at work building levels for Doom ii: Hell on Earth, when I couldn’t be sat at my 486 DX2 66 Mhz PC playing. That there is a level creation option in this version is a really great tip of the hat back to the original which I really appreciate

Another classic AAA game to have in my collection, that I’ve promised myself I’ll finish before I buy anything else 🙂
[rating:4.5] everything you want from a mindless shoot ’em up, rocking heavy soundtrack, and many hours replay with map creation and multiplayer

Ubuntu 18.04 LTS Bionic Beaver release has been a mixed bag for me.
Audio is now working from my AMD graphics card to my TV’s in HDMI, no more having to wear headphones to watch any programs
OpenVPN isn’t connecting to a DNS server, traffic still running through tun0, but not my DNS.
I’m using a secure DNS, but kinda shit that it’s coming from my IP to there, and my firewall script blocks all DNS activity.
Spent too many hours trying to fix this, hope an update of either Ubuntu or my VPN will resolve this in the near future. 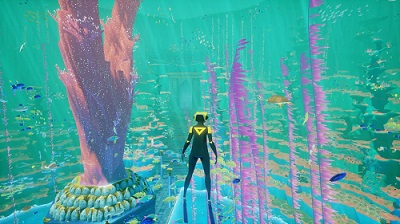 Love Journey, played through it a couple of times of the PS3 & 4, was looking for a bit of relaxation gaming, so (again finally!) picked up Abzu.
It’s been on my radar for a while, so for the price of a cup of coffee it was a no-brainer to pick up.

What an awesome experience, I found it cross between Journey & Echo the Dolphin, with a touch of Child of Eden.

Enjoyed the none dialogue story, the full ocean conservation feel, but most my 3 year old boy sat with me an played among the fishes; he loved the appearance of the Orcas and Humpbacks, the game was worth it for his smile alone.
[rating:4] graphically not dazzling, but fluid movement, and quality chilled escapism

Still spending many hours in the black working on my next Elite title, grinding away slowly, binge watched last series of Silicon Valley, and nearly finished Stranger Things, and got to the end of Charlie Booker’s fabulous Black Mirror.